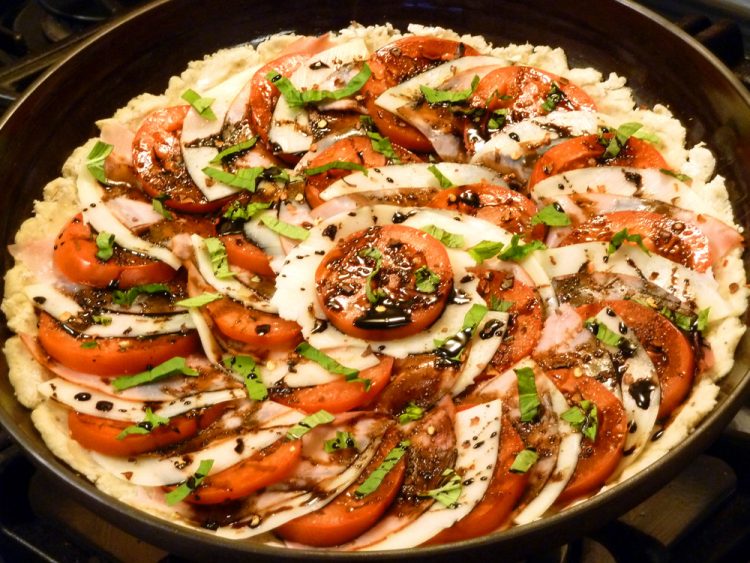 Flatbreads are all the rage these days. With that cracker thin crust and pizza toppings, they are great to share as an appetizer, yet hearty enough for a meal. This skillet flatbread version is a take-off on basic margherita pizza and uses a yeastless crust made in a matter of minutes with baking mix and 3 additional simple ingredients. As with its pizza cousin, the variations are limited only by your imagination.

Bring balsamic vinegar to the boil in a small saucepan. Boil until thickened and syrupy, and reduced to about 1/8 cup, about 10 minutes. Watch carefully so that it doesn’t boil over or burn. Set aside to cool.

Stir olive oil and oregano into the hot water. Combine the hot water with the baking mix, stirring 20 strokes with a dinner fork. Do not overmix. Using your fingers, press the dough into the bottom of the prepared skillet and slightly up the sides to form a crust. It should be a very thin layer.

Beginning at the outer rim of the pan, layer tomatoes, mozzarella cheese, ham, and basil in a circular pattern over the crust, ending in the center. (Refer to my photo of the finished flatbread.) Sprinkle with basil, garlic powder, dried red pepper flakes, and salt. Drizzle with the reduced balsamic vinegar.

Bake, uncovered, 20 to 25 minutes until crust is golden. Let rest for 10 minutes, then cut. Serve with a side salad.

Notes:
• Select a dry ham rather than a wet one so the crust doesn’t get too soggy.

• Roma tomatoes are used because they are fleshier with less seeds. Again, this is to keep the crust as crisp as possible. If you substitute regular tomates, be sure to de-seed them before slicing. Simply cut them in half, then scoop out the seeds with a butter knife. Turn them cut-side down on a paper towel and let them drain before slicing.

• To chiffonade-cut the fresh basil leaves: Stack the leaves one on top of the others in a stack. Roll up from the long side into a cigar shape. Slice into ribbons with a sharp knife.

• Provolone slices may be substituted for the mozzarella cheese.

• The reduced balsamic syrup may be made in advance and refrigerated indefinitely. It boils down into a tangy, sweet syrup. I like to keep it on hand in a squirt bottle in the refrigerator to use as a finishing drizzle for meats, poultry, and fruits. It’s even good on vanilla ice cream.

• Think of your favorite pizza and let your mind go crazy with variations on this theme. Pepperoni immediately comes to mind. Just take care not to use toppings with excessive liquid which would soften the crust.