The Difference Between Pork Loin and Pork Tenderloin

Your recipe calls for a pork tenderloin, but when you get to the market, you find both pork tenderloin and pork loin. Which one do you need? The size difference is obviously extreme.

In short, the large pork loin is normally prepared as a roast, while the pork tenderloin is cooked hot and fast. These photos and additional information will help you choose the right cut for your recipe.

Pork loin is a fairly lean cut of meat, other than the fat cap. There’s a reason why it’s marketed as “the other white meat.” When cooked, the meat does indeed turn white. It’s a good choice for those on a low-fat diet. The fat cap can easily be trimmed off, although I suggest leaving it on during the cooking process to retain juices and trimming it after the fact if you must.

Pork loin is cut from the topside of the backbone framework of the pig. Several different cuts come from the whole pork loin, and you can save money by cutting this large piece yourself. It’s a long cylindrical, boneless piece of meat that is larger on one end and smaller on the other. Imagine cutting the whole loin into thirds. The center third of the loin may be cut into steaks or boneless chops. The large end is sold as pork sirloin roast. The smaller end is sold as country-style ribs. The whole loin averages around 20 pounds, and can be upwards of 30 inches in length.

This is half of a pork loin, usually prepared as a roast.

In most grocery chains, you’ll most likely find a center-cut loin roast or an end-cut sirloin roast.

Pork loin can be tough, because it is a lean muscle. Slow-roasting is recommended to give time for the fibers to break down and tenderize. However, over-cooking can make the roast even tougher. Forget the old wives’ tales about cooking pork to death. Today’s commercial pork bears virtually no risk of trichinosis. It should be cooked to no more than a medium doneness, about 160 F. in the center. Keep in mind that the pork loin will continue to cook during the recommended 10-15 minutes resting period, so you might want to remove it from the oven at 155 F.

I usually buy a whole or half pork loin and cut it into pork loin steaks. To be certain they will be nice and tender under a quick cooking method on the grill or stovetop, I pound them with my favorite meat tenderizer and re-shape into steaks. I then wrap them individually in plastic wrap to freeze in an air-tight zip-top bag. (One of our favorite pork loin steak recipes is Pork Loin Steaks With Raspberry Cranberry Pan Sauce.)

This is the pork loin roast that I’m cutting into steaks.

The pork loin steak on the left has been pounded and reshaped. The one on the right is waiting its turn to be tenderized.

Both the pork loin and pork tenderloin have a tough silver-skin surrounding the meat. This is normally trimmed off before packaging to sell. If not, you’ll want to remove it with a sharp paring knife.

The pork tenderloin is found under the topside of the backbone. This is the filet mignon of the pig. It’s small, usually about 1 pound in weight and 10 to 12 inches long.

This whole pork tenderloin is about 12 inches long and 3 inches in diameter. The measuring cup is there for size comparison.

Just as beef filet mignon is the most tender part of the cow, the pork tenderloin is the most tender part of the pig. This is because it doesn’t get exercised like the loin. As such, you need to cook it fast and hot or risk wasting that tenderloin investment by overcooking. This gourmet cut will almost literally melt in your mouth if not overcooked.

Cook the pork tenderloin to an optimum inner temperature of 145 to 150 F, medium-rare. It should be slightly rosy in the center when done. 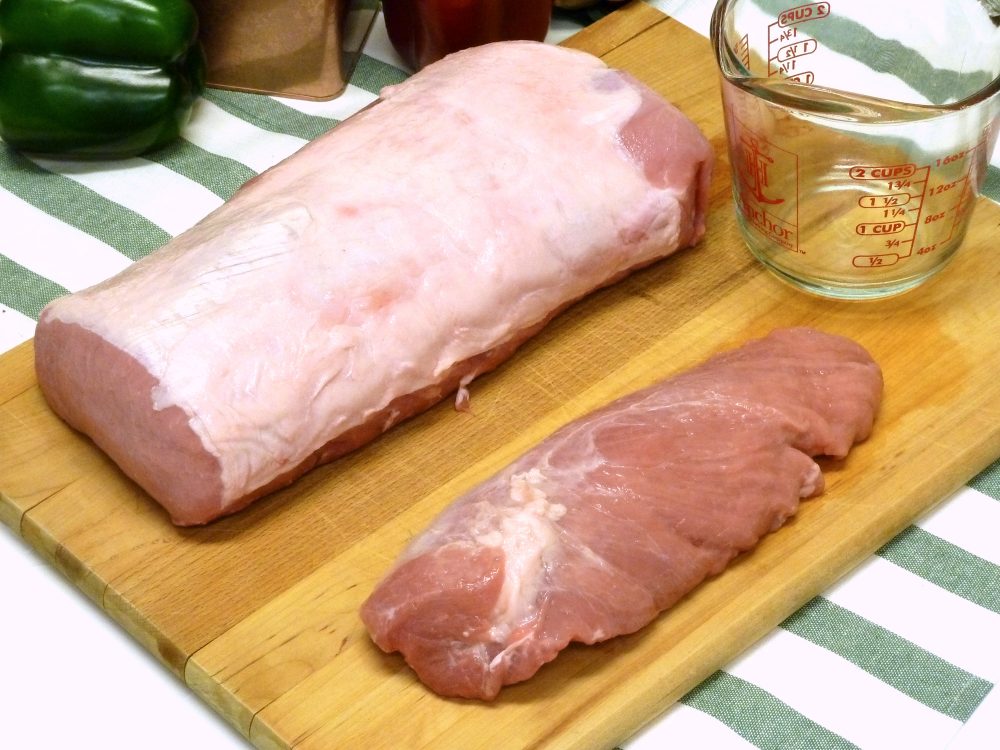